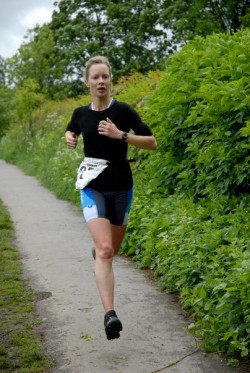 Mandy Clarke has been making some really good progress lately and went on to finish 4th in the V40 age group in a time of 01:20:20. Mandy is pictured left racing here at Allerthorpe Sprint.

TDC had a big showing at the Blenhiem triathlon this weekend and with some fantastic performances by all. Zoe Morrisett made some really big improvements this season already finishing her sprint in 1.38.45, We are still waiting on all final results to come in.

Chris Hayward did one of his local races the Breacon triathlon to sharpen up for Windsor triathlon this weekend. Chris won the race in a time of 1.02.34.

Madrid WCS race was a real eye opener this year in the mens race, showing the pace was on from the start with the GBR’s Brownlee brothers taking the pace out with Gomez from Spain. TDC athletes Stu Hayes and Will Clarke were just off the main pack in the swim which split and the 17sec gap became 1.25 coming into transition this was difficult to make any impact and Will finished 25th with Stuart 34th. They both now are focusing in on their next race the WCS in Kitzbuhuel.

On the other hand Jodie Stimpson made the front pack in the swim in the women’s race sitting comfortably in the pack with 15 other women. Some of the big names were in the next pack back which turned into 45sec coming into transition. Kathy Tremblay also missed this pack and had to settle in the third pack which was even further back coming off the bike. Jodie had a solid run to finish 15th and Kathy finished further down the field. They both looks to their next race in Kitzbhuel in less than 2 weeks time.