Last weekend was one of my favourite races for the year in Mooloolaba, Australia. It is always a great weekend with thousands of athletes, Elite and Age group, heading to the Sunshine Coast all for the reason – to race to their limits! Thursday before the event Mooloolaba threw a curve-ball our way with some very abnormal weather, there was a huge downpour of rain with some cyclonic winds which lead to serious flooding resulting in half of the race course being under a metre of water. I must commend the work of USM Events for managing to deal with the situation and still make the weekend of festivities continue as normal after a very big cleaning up effort. Luckily the ‘Sunshine Coast’ lived up to its name and race day was magnificent, the sun was out and it was perfect conditions to battle it out.

Being the first big race of the ITU season, this race was another chance for a great shot at earning some early season points. I knew I had a better chance of winning the race if I pushed the swim and bike hard, aiming to gain a margin over the rest of the field. I wanted to go out and be aggressive from the start! Mooloolaba is renowned for being a very tough course, up and over the hill 14 times on the bike followed by another four efforts on the run brings out the best in people. There is always something about the first big race of the ITU season, especially when it is an Olympic year, its hard to describe. There is tension, uncertainty and nerves yet at the same time there is an excitement and feeling of happiness within the bunch as the racing season really begins. 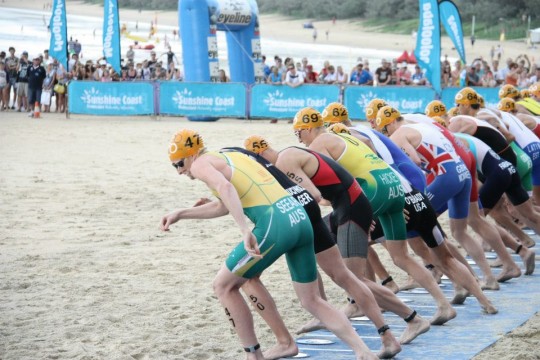 Tactics play a part in every swim but at Mooloolaba there is the extra tactical challenge of an ocean swim. On Saturday there was a strong sweep on the course moving from right to left, seeing this everyone else chose the right side of the start pontoon. I went against the trend and chose the left side of the starting ramp, I had a great run into the surf and found myself in second around the first turn buoys. I definitely had a little smile on my face knowing that my ‘risky’ tactic had worked! The plan for the swim was about being in the front of the race while not leading so as to conserve some energy, unfortunately before I knew it I was leading the race into a strong head current. I kept it steady into the head current and pushed the pace with the tail current knowing that that would gain me a bigger advantage while using less energy. It worked – the bunch went from a compact group to one long strung out line of athletes! I lead out of the water on my own, winning the swim prime and earning myself some valuable time to get through transition cleanly. The home crowd support was awesome, enough can’t be said for the advantage of a home crowd! 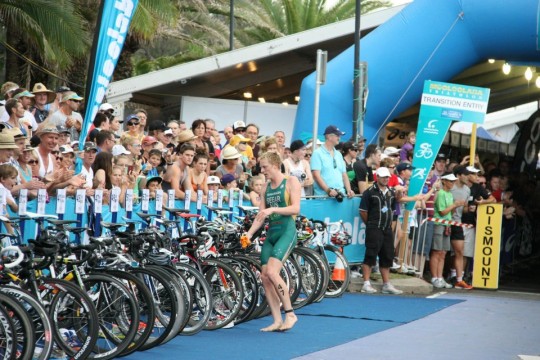 Once onto the bike I looked back to see that I had two athletes chasing me, I decided to wait for them, a group of three is definitely stronger than just myself when trying to stay away from a hungry pack of chasing athletes. By the end of the first lap of seven the front group of twenty-five caught us. There were two key things on this bike leg that I wanted to make happen, to win both of the bike primes and to get a good breakaway off the front of the group. The primes went to the first athlete across the line at the end of the second and the sixth laps. Knowing this, once I was caught at the end of the first lap I hid in the pack behind the wind, attacked towards the end of the lap and took out the first bike prime! Following on from my attach we managed to get a few athletes off the front, unfortunately once people were in the group they didn’t have the power to keep pushing the pace so we were caught again. Once in the main pack again I could see that athletes were hurting and this gave me more motivation to keep the pace on. For the next few laps it was a game of cat and mouse, with Stuart Hayes and myself constantly trying to get off the front it certainly kept things interesting! I have a history of making the bike count in previous years at Mooloolaba and I definitely noticed that I was a marked man. 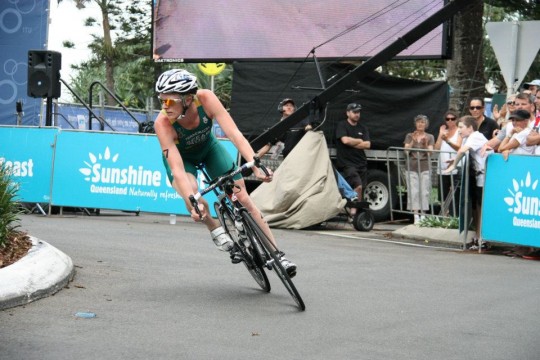 With two laps to get we thought this is it and we need to make a good attack, myself and Stuart Hayes, Elliot Brown and two others got a sizeable gap over the main pack. The breakaway numbers were dwindling pushing back into the strong headwind and it ended up with just myself, Hayes and Yamamoto doing all of the work, the other two athletes in our group were not interested in helping but rather were there for the free ride. As irritating as this can be I just kept my head down and the pace on! I won the final prime and pushed the pace until the second transition. The last lap can be crucial for gaining extra time on the bunch depending on the attitude of the group – they either situp and wait for the run or they keep chasing!

With Stuart Hayes and myself in the break it meant the main group was worried and chased, we entered transition with a small lead but the main group was lurking not too far behind. I knew after that aggressive ride my legs were going to be a bit slow to get going. By the first run turn the ‘big boys’ of the running world came past me and the pace was on. I kept my pace going and knew I just had to get through the first lap and my legs would start functioning! Unfortunately my legs did not come through on the run and it was a rather unsatisfying finish to the race. I can’t fault the support that I had on the course; it definitely helped me get through! 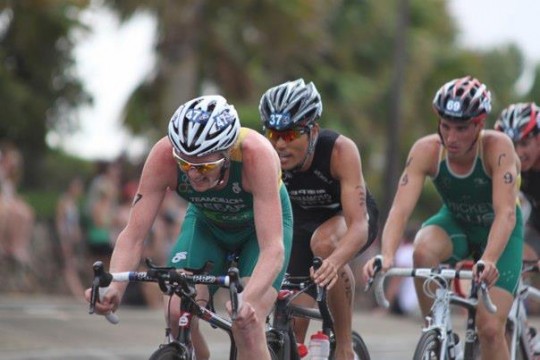 I gave it everything on the day and took a big risk trying to break away all day; it was a risk that would either pay off nicely or not at all. I was very happy with my race although disappointed with my final result. There is something satisfying about going out there and making the race happen, taking a risk and nearly pulling it off! I knew racing Mooloolaba like this was my best chance to get a podium; I nearly pulled it off but not quite. I walked away from the race with all the primes and lots of time leading the race for the first two thirds of the day. 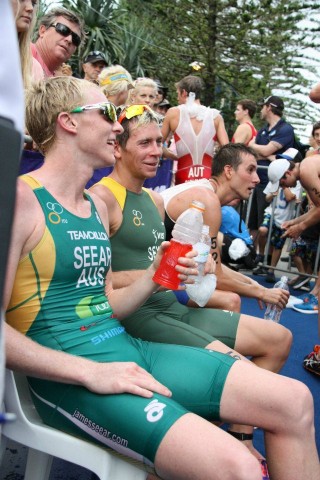 ITU racing is a tricky game, although at the moment the only tactic happening is people getting through the swim and the bike waiting for the running race to happen. It is fast and eventful always being on tight, multiple lapped courses but I feel the time has come for me to really use my strengths and tackle the non-drafting racing series this year. The Olympic team has not been released and to be honest there are still multiple contenders for the Australian team. I have not given up on my Olympic dream it is now up to the selectors and who they want to choose. My plan for the coming months is to head over to America and base myself in Florida for six weeks with three races planned. There are two race series in America and Europe that I am targeting, both with lucrative prise offers and racing much more suitable to my strengths and body composition. I am so excited for this new challenge and change in the game, non-drafting racing is about being tactically aware and on top of your game. I need to be able to race as fast as I can for the entire two hours! My next race will be the long running well known St Anthony’s triathlon on the 29th of April, following this I will race Memphis Triathlon and Austin Triathlon before heading to Europe.