Michelle Dillon known more these days for her successful coaching than athletic performances, raced as a last minute entry at the Windsor Triathlon after retiring from the sport more than 4 years ago due to double fusion in her spine.

Michelle underwent major back surgery in September 2008 which put an end to her successful Triathlon career.

However over the weekend the 39 year old veteran decided to race The Windsor Triathlon which eventually turned into a Duathlon due to dangerous swimming conditions. The format began with a 1km run, then a 42km bike and finished with 10km run.

Michelle’s aim for the weekend was to try to come off the bike and into T2 with the leaders and just to finish the race. Michelle said  she got a last minute invite and couldn’t resist.

Michelle said “Coaching has been very intense these past few years you  focus so much on your athletes and tend to forget about yourself, this was something I needed to do for personal reasons, I love pushing myself, I wanted to race in an elite race again, there was an opportunity so I thought why not.” I didnt expect to finish so far up as I hadnt ridden my bike in months and knew I would suffer on the last run. The crowd got me home, it was a fantastic feeling to be racing again!

Cramps also got the better of Michelle during the bike leg and also on the 2nd run however after stopping and taking in a gel she re-focused and got herself to the finish line finishing in a credible 4th place. 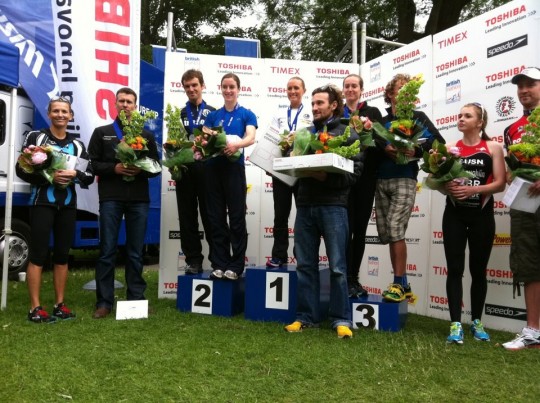 The winner of the Race was Jackie Slack who was coming off a successful 70.3 win just a week earlier. Congratulations to all that competed over the weekend.