Well….another week done on the TDC training camp with coach Perry Agass. Time is flying by and the days just seem to amalgamate into one and I find myself pondering what day of the week it is!? 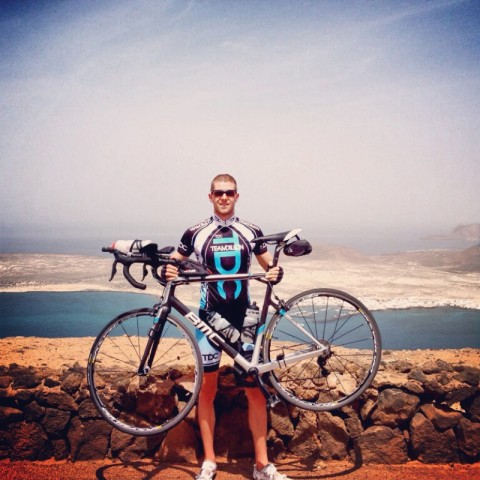 The 2nd week for me has been a real test, physically and mentally. The week started with the challenge of conquering the Ironman Lanzarote bike course. I was excited, nervous, but most of all, determined to get round and finish. The day started with a restless night of thinking about what lied ahead. I woke at 05:30 to get a good breakfast in and at 08:00, the journey began.

For the first couple hours I slowly built into the ride focusing on keeping my cadence relatively high (95-100 rpm) and my power consistant, making sure not to burn too many matches. Perry stayed with me on the scooter during this time, always reinforcing confidence and keeping me mentally sane.

After two hours of riding, I was on my own. I was heading out across the lava fields at the foot of Mt.Timanfaya and down to La Santa which was the other side if the island! I made good time as I had most of a tail wind and a downhill section into La Santa. It’s such a great feeling when your riding along with the wind behind you, legs pumping like pistons and cruising at 92km/h (current speed record) haha….

I knew that once I reached La Santa, that would all change. From La Santa to Teguise, where I was to rendezvous back with Perry, was a real slog. By this time the wind was smacking me in the face and temperature in the mid 30’s being blown down my throat as my breathing got heavier, and legs started hurting.

As I reached Teguise, at the foot of the first big climb I met with Perry to refill water bottles. After the last section, I was actually looking forward to this climb! I had done it twice before so I knew how to pace myself. I made it to the top in record time but not without pushing to my limits and beyond. The descend was incredible. Steep down hill sections with hairpin after hairpin all the way into Haria. From this point I had about 10k to reach the highest point of the island. The fact that I had reached this point was amazing but I still had a long way to go.

The next part of the ride was certainly the toughest, mentally and physically as I was now beginning to hurt and once again the wind and heat was against me. My focus was on cadence and power, keeping it consistent and making sure I took on fluids. Perry was great at pushing me on. I was heading back to Teguise and familiar tarmac before the last leg of the ride where I knew the majority of it was downhill.

6hrs were on the clock…salt crystals had formed over my arms and legs, my hands were sore, I felt dehydrated and had the sensation of pins and needles in my body as my glycogen stores had been severely depleted. I remember thinking ‘its all down hill from here’ and all the way back I thought of what I had achieved. I was elated to have completed the 180k bike course, and a journey of physical and mental toughness I will never forget.

Sunday was an active recovery day before the next key session on Monday.

Mondays session was a steady 3hr bike loop out to Yaiza followed by a 2hr brick run w/ 1hr at race pace. There was an elimant of fatigue still in the legs but that’s something that I have come accustomed to since training for Ironman Distance. It was all about getting off the bike feeling strong and building into the run, ready for the race pace effort. The first 30mins I found my rhythm, focusing on a more economic run technique which I had been working on for a few months with Perry and has made such a positive impact on my running. The next phase was 1hr at race pace. I was running out on the Ironman run route with wind and heat battering me, testing me, making me ask the questions ‘have you got what it takes’. My pace got quicker and was feeling stronger and was holding around a 3:50/km pace. I had Perry supporting me again, this time on his bike. The 60mins were almost up and the final push to my limits begun. Again this was one of the hardest sessions I had done but I knew myself I had achieved another milestone that day.

The following day was to be fairly light. We still had 2-3 sessions to do but the intensity was lower to allow the body to recover and adapt to the previous sessions.

Perry assured us that the last big session of the week was gonna hurt so we took advantage of the active recovery day.

So the last hard session of the week….it was to be a brick session that consisted of a 15k bike and 2k run, which i had to do 4 times. My aim for the session was to pace well and for the last couple splits go as hard as I could sustain for the remainder of the distance. I have to admit that it didn’t start well as I was feeling quite tired from the weeks volume and intensity. The last few days had been abnormally hot which took its toll as well. The session was a real test of my character and because I felt I was not performing, I pushed through it with shere grit and determination and was pleased with the result by the end. It had capped a very successful and progressive week for me. Lanzarote is definitely one of the toughest places to come and train but as my coach Perry says, ‘what doesn’t break you, will only make you stronger’, was certainly the case this week.

I’m now enjoying a 36 hour period of down time, ready to attack whatever is thrown at me next week.

I’m am also looking forward to more of Team Dillon athletes joining us here on the training camp in the next few days.