Jimmy Seear stepped into non-drafting this season with his first up race St Anthony’s 5150 last weekend. He tells us about his race experience below.

Last weekend I took the plunge and started my first American based non-drafting race! It kicked off in St Petersburg, Florida on the south east coast of the USA. The race distance is the same, 1500m/40km/10km, but the race is conducted under a non-drafting rule for the bike. Non-drafting rules state that each rider has their ‘own’ space around them, one metre each side of them and 10m behind them that no other rider is allowed to enter so that no one gains any advantage of a draft from another rider. This makes the bike leg of the race very important; you have to be able to ride hard for 40km! The only non-drafting race I have ever competed in is the famous Noosa triathlon at the end of each year.

This race had one of the strongest fields assembled outside the grand final so for my first one it was going to be a challenge. I went into the race slightly in the unknown, these races are run very differently to any other races I am used to so I didn’t put any expectations on myself, I just wanted to get my first race under my belt to learn the rules and see how the races work over here! I was happy with my form, as I knew we had been putting in some good weeks of work before I left but racing is always a good test to see where I am really at.

St Anthony’s triathlon starts at the brink of dawn with the gun going off at 6.50am just as the sun is rising. It was quite strange being 20mins from starting and still no daylight around! It was a non-wetsuit, one lap point-to-point swim. It was surprisingly choppy in the water and with dolphin sightings all weekend it definitely made it a bit magical. My plan was to not lead the swim but rather play a slightly more cautious card and save some energy for the rest of the day. I followed the feet in front of me and positioned myself in third for the entire swim with my good friend Josh Amberger leading the way. I exited the water in 3rd place of a group of about ten and was ready to get onto the bike and see how I faired.

I had a good transition and was second onto the bike. For a non-drafting race the St Anthony’s bike course is quite technical with 28 corners for the entire ride. I positioned myself well straight away and was sitting in second with a small group of four starting to form. Since I first started triathlon riding has always been my strongest leg, but today would be a real test riding with the strongest men in the triathlon world so I was ready for moves to start happening straight away, it was going to be a hard day! Being my first non drafting race and still learning the rules I was playing things very cautious on the bike leaving very big gaps between me and the three riders in front of me; Cameron Dye, Ben Collins and Josh Amberger. Unfortunately I played things a little too careful and lost those three boys at about the 5km mark, I kept chasing on my own for a bit being frustrated at myself for just letting them go. This was my first big lesson for the day, learning how ‘the pack plays!’ I need to position myself better and work with them to set myself up for the rest of my day. After riding on my own for about 10km I dropped from the front three to the next group, this group had a lot of the big players in it, Paul Mathews, Bevan Docherty, Stuart Hayes, Filip Osplay – previous winner – and quite a few others. In hindsight this was the best thing to do as I got to see how the other athletes positioned themselves and worked together when you are riding near others. The front three stayed away for the rest of the ride, entering T2 with a 2.30min advantage over the group of 10 I was riding with. I was excited to see how everyone was going to run off a hard ride knowing that the non drafting ride takes a bit more sting out of the quick runners legs compared with an ITU bike.

I was well positioned off the bike, exiting transition second from my pack. The pace was on at the start of the run and I was sitting in second with Filip Osplay feeling pretty good. Having not raced for a little bit I felt a bit sluggish in the swim and the bike, I was hoping this run was going to be where I came good and got the body going! The defending champion, Filip Osplay, picked the pace up on the run early and I went with his acceleration. I ran with him for about 1500m before starting to drop off with some heavy legs. It was an out and back run and our time check at 3km was that we had halved the gap the leaders had on us off the bike this was quick! I dropped off the charging defending champ and fell back to a group of 3. It was a good tempo and I just needed to settle into a good rhythm.  I was starting to feel a little better when one of the guys attacked the pack and picked up the pace, I went with him. I quickly regretted the acceleration and started to drop off the pace. My game plan now was to just settle into my own pace and get myself to the finish line. At the run turn the gap to the front of the race was not that much but there was a group from behind with some fast runners catching up as well. 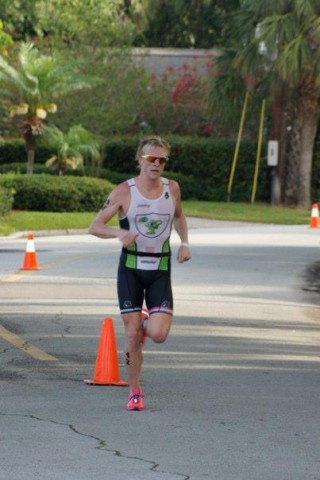 I really started to struggle in the last 2 km and got caught by 2 fast runners from a pack behind me. I held off the 3rd runner and managed to finish in 11th place. Straight after the race I wasn’t sure how I felt about the race, I definitely had some mixed emotions as to my performance. I wanted a better result, a top eight and I would have been fairly happy, but at the same time I was beaten by one of the best fields ever brought together outside of the grand final. The one thing playing on my mind was that I knew I could have been on the podium if I didn’t make my mistakes at the start of the bike and been a bit more of an aggressive and not given away so much space. I have finally got my first American non-drafting race under my belt, I can go away from this race with a bucket of motivation and a wealth of experience to take into the rest of the year. I am definitely looking forward to the rest of the year.