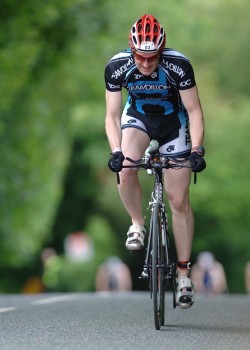 Ian Hunt (pictured) was out at Wimbleball at the weekend aiming to go under 6 hours over the half Ironman distance.

Ian did this race 5 years ago and had his sights set high after training under TDC coach Annie Emmerson for the past few months. Ian raced very well and finished in 6.05.43 which was 15 mins faster than previously on this course, but just outside the 6 hour mark he and his coach set himself.  However we are confident he will hit his target for his next race in Bolton. Well done Ian.

Dan Falconar was also racing at Wimbleball and again produced a very solid result only a week after qualifying for the world champs over Olympic Distance to be held in Beijing in September this year. Dan finished 23rd in his age group in a time of 5.29. Dan is having a very good season so far and his coach Michelle Dillon is looking forward to seeing what else this versatile athlete can do! Unfortunately Ben Webeck was sick during the event and was forced to retire from the race. Ben will be back for sure and still has a big season ahead of him.